I recently made a couple trades in a 12 team two keeper league(with no penalty for keepers) to improve my team for the upcoming season.

I traded Mike Evans and the 2nd overall pick for the 1st overall pick(which will be Saquon Barkley), I then traded David Johnson and a 2nd round(23rd overall pick) for Julio Jones, Melvin Gordon and a 9th round pick. I still have another 2nd round(13th overall pick)

Would love to hear thoughts!

I’m not a huge fan of the first trade at all. Assuming that the draft includes all non-keepers, there will be a RB available there that, in addition to Evans, is far more valuable than Saquon alone.

The second trade I think is fine. I think I’d rather hold onto Evans, the 2nd overall, DJ and 23rd though. That seems like a contender.

Thanks! I hear what you’re saying about the value. The highest adp RB that would be included in the non-keeper redraft would be McKinnon. Other than that there would be WRs, Hopkins Allen Adams etc. So I figured that the stud bell cow Barkley would is more valuable than a 2 WR combo, when I already have Julio, as they are few and far between…

What is your roster and scoring format? I would be absolutely ecstatic to have a trio of Evans/Julio/Hopkins if PPR and you’re capable of starting all 3.

Not a fan of either, tbh. I’d much rather have Evans, Guice and DJ. By a lot actually.

My worry if DJs offense. As great as he is talent-wise. Evans could be better this year, but I think the sky is the limit for Julio this season bouncing back in a big way.

Guice can still be acquired later in the draft and I’m not hyped on him tbh.

As for Guice, if you’re not excited about him you need to reconsider. He’s easily the second best back in this draft, and his closest athletic and college production comp is Zeke. Yes, really. 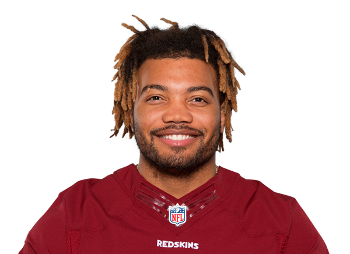 Oh I’m just saying Im not hyped enough to have been taking him with the 2nd round pick I traded. A round or two later is when I would and will be considering him depending on who’s around and where my team build currently sits!

I actually think you repositioned well. I was not a huge fan of trading away the #23 overall pick as that would have given you 3 picks in the top 24 to go along with your two keepers. However, I would take Barkley, Julio and Gordon over the other options. I think Barkley will outscore DJ this season, Julio is an upgrade over Evans and Gordon is better than any RB available with the 2nd overall pick.

DJ is what we hope Barkely will be. An elite runner and elite receiver. A completely dominant RB. I’ll take the guy I know is genuinely great every time, and would be very willing to bet that on the per game production between the two.

As for Gordon, he’s a fine player, and I actually like him a good deal this year, but I don’t think he’s special and I think Guice can be. Since you’re taking a risk on a rookie vs a proven vet either way, I’d be more willing to take the upside gamble with the non-elite player than the bona fide top tier stud.

As for Julio, I agree that he’s better than Evans, but I don’t think it’s a huge margin (for fantasy puposes), and I don’t think it’s going to be that way very long. Jones is starting to get to the point where elite athleticism starts to fade, and it often goes fast. Further, he was outside the top 25 in consistency last year and while he finished higher than Evans on the year, he ranked outside of the top 20 PPR wideouts in 11 of his 16 games, and 20 percent of his total fantasy points came in just one game. In other words, he killed you last year. Evans was obviously a disappointment last year, but he still finished better from a consistency standpoint and was the WR1 the previous year, so we know he has that in him.

Big fantasy mistake right there. I wouldn’t have made those trades. I would have kept Evans and Johnson and used the 1.2 pick to grab Hopkins, and 2nd round pick to grab Guice if he was the best RB available.

RBs - Johnson and Guice, WRs - Evans and Hopkins would be a great core team to build around, 3 studs and one that could be a stud.

Yeah I think as we have seen in this thread that opinions differ on upside and projections for these guys this season… I have more faith in Barkley Julio and Gordon this season personally. I don’t see DJ repeating 2016, Evans being average and Hopkins regressing big time… basically my team will be starting with Barkley Gordon Julio and one of Kelce Josh Gordon Baldwin Or McKinnon. Instead of DJ Guice Evans Hopkins

For the record, he doesn’t need to. He could lose 22% of his production from 2015 and still have been RB3 last year.

Playing part time in 2015 (a grand total of 161 touches), he was RB8 in PPR ahead of Gurley who had 250 touches. That would have also put him ahead of Ezekiel Elliot last year ( Zeke had 268 touches).

The guy is as good as it gets.

Trust me I know how good he is, he won me a championship in 2015 with his late season herioics, and trampled my league in 2016 again. And I’ve heard the 22% drop in production over and over.

The 2nd round pick I traded also has to be viewed as a late 4th round pick due to the fact that there are already 2 full rounds of keepers gone. Again I think it has to be viewed from different perspectives as I see Gordon not being way behind DJ this year and Julio going off and potentially battling Brown for WR1 on the season. Would that be shocking?

It’s your team, so it’s your opinion that matters.

When discussing all of this, it comes to a point where it’s splitting hairs a bit. Julio vs Evans is close (FYI I’m also a Big Bucs fan) but I feel julio has more upside yet his consistency was an issue. Evans had a down year but will duffer with the Jameis suspension.

One thing I’ve noticed is the talk of DJ being guaranteed. He absolutely has the skill set and is uber talented but he’s only done it for one full season. His rookie season was basically a half season yet was great also. BUT…one thing I feel people are overlooking is how good the Cardinals offense was in his two productive years. He scored 28TDs in those two years and will not come close at all to that production. In 2015, Arizona was 13-3 with the 2nd best offense in the league. In 2016 they had the 6th best offense in the league. Arizona is going to have a bottom half offense this year so while he will be good, I don’t see him having a top 5 season. I think DJ and Barkley will be almost identical this season as Barkley will play for a much better offense.

In 2015 they had the #2 offense because Palmer had the best year of his career and was an MVP candidate. 2016 they had the 6th best offense in the league espite a major regression from Palmer and the passing game as a whole, because DJ was a monster…

He’s not only guaranteed a feature back workload as a runner, but he’s at worst the 2nd best option in the passing game. If they’re behind, that may even be a good thing for him. Frankly, a top 5 finish is a virtual lock, barring injury. He’s that good and that involved in every aspect of what they do.

I also don’t understand why you’d assume the cards are going to be a bottom half offense. They had garbage at QB and RB for most of the year last year and were missing one of the best offensive players in the league (DJ). Bradford has been legitimately good when healthy for years, and the rookie has real talent. Both are far better than the garbage they were working with last year.

You asked why I thought they would be a bottom half offense. They were a garbage offense last year, and of course David Johnson will make them better BUT there O line is still one of the worst in the league. The grades at PFF bear that out as well as their rankings for the coming year. They look to be a bottom end O line again. Their WR core is incredibly weak once you get past Fitz. Bradford is better than who they had but he’s injury prone and will likely cede to Rosen at some point. While Rosen is talented, it’s very rare that a rookie QB leads a team to a top half offensive finish. If you check the past 3 years, Wentz was the highest finishing rookie QB and the eagles were ranked 16th. Next best was Jameis Winston at 20th. Defenses will load up to stop D.J. and that’s why I feel the way I do.

All of that was true in 2016, other than the QB, stuff, and frankly, Bradford can be every bit as good as Palmer was that season. And actually, the best offense lead by a rookie in the past 3 years was Dallas with Prescott.